The ability to have text read aloud is a vital access point for many students, and a helpful support to others. Students who may have challenges seeing or decoding text, including those with visual impairments, dyslexia, or learning a second language, use text-to-speech technology as well as recorded and in-person human voice to access rigorous academic content. One of our student testers noted that she would use a read aloud feature while reading along with the text in order to stay focused in a noisy environment.

Try out our read aloud option in Clusive! 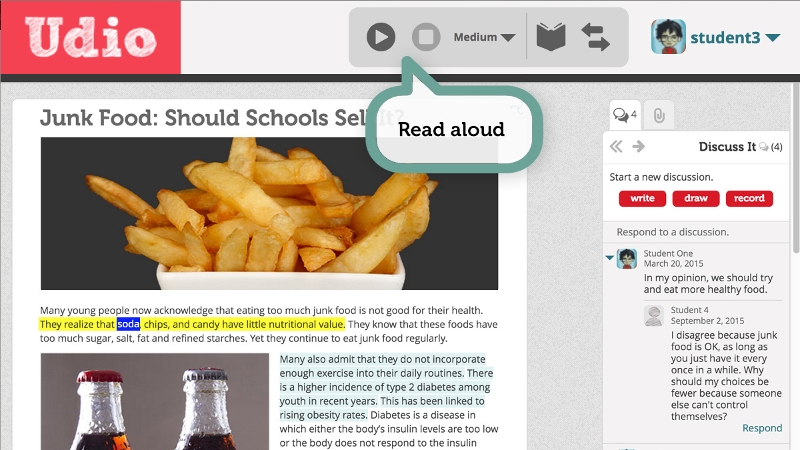 The screen display of a website with an article and supporting images. The top of the screen says “Udio,” has a toolbar, and has a student avatar. The first button in the toolbar is labeled “Read aloud.” In the article on the page, the second sentence of text is highlighted in yellow, and the fourth word in that sentence is highlighted in blue. To the right of the article, the screen displays a “Discuss it” box with other students’ comments.

Read-aloud features may support students with reading and other disabilities on reading tasks:

The intelligibility of text-to-speech is critical if it is to be used to aid children’s reading comprehension and research shows multiple factors can influence intelligibility.

There may be other ways to increase users’ satisfaction with read-aloud features that are not directly related to intelligibility:

Having assessments read aloud by a person or text-to-speech technology may improve scores:

The features of the CISL tools are related to existing guidelines and best practices, including the Web Content Accessibility Guidelines (WCAG) and the Universal Design for Learning (UDL) Guidelines. The feature of embedded comprehension checks is connected to:

WCAG does not require that a read-aloud feature be provided, but many of its guidelines are aimed towards making sure that content will work with read aloud software that the user might have (ie, a screen reader). For instance guidelines about avoiding images of text, providing expanded forms for abbreviations, and so forth will allow a screen reader to work smoothly with the content.

See how TextHelp’s Read&Write for Education provides Read Aloud and other supports.

Screen readers like JAWS, VoiceOver, and NVDA make it possible for people with visual impairments to access the internet, emails, and computer documents.

Raising the Floor compiled a list of over 75 Read Aloud tools, as well as some supporting research.

Understood.org has compiled a list of assistive technology software that can help students who struggle with reading, including several programs that utilize TTS software that allows students to have webpages and documents read aloud to them by computer voices.